Which draft is this…?

Home/Which draft is this…?
Previous Next

Which draft is this…?

There’s an interesting shift that takes place when you think you’re finally ready to share your script for the first time. 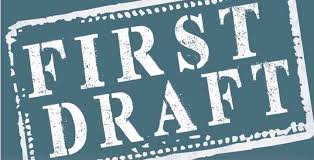 This may be your third, fourth, or fifth (or more) private draft that you’ve been slaving over for months, but now that you’ve determined that you’re ready to take the plunge and release it for the first time, suddenly all those drafts become your “first draft.”

In other words, all the rewriting work you’ve done up to this point has been just getting the script presentable for its initial exposure to the outside world.  No one should ever know how many earlier drafts you have slogged through to get it to this point–that’s information only you should be privy to.

A corollary to this is to always identify the draft you first release to the world by date and not by number (as in “first draft,” “second draft,” and so on).  You’ll always be working on a the latest draft of the script, regardless of which “number” it is, and dating each draft identifies it for you and any others who may need to know what version they’re working with.  But it doesn’t broadcast how many drafts you’ve been through–info that’s really nobody else’s business.  I’m always amazed when I see title pages with the draft number prominently displayed.  That’s your secret to keep.

And, come to think of it, it’s probably best if even you don’t keep an actual count.

I’m the Program Director of the low-residency MFA in Writing for Stage and Screen being offered by the New Hampshire Institute of Art.  Our last residency ran from January 6-15, and (if you hurry) we can still consider applications for starting the program with our June 2017 residency running from June 22-July 1.  If you’re interested, email me at buzzmclaughlin@gmail.com.

I’m also a playwright and screenwriter, producing partner in my production company Either/Or Films (The Sensation of Sight and Only Daughter) a professional script consultant, and the author of The Playwright’s Process.  You can follow me on Twitter @eitherorfilms or @mfastagescreen.  I’m also on Facebook at buzzmclaughlinscriptconsulting.