Last month there was an exhilarating gathering of script writers–playwrights, screenwriters and television writers–in beautiful Peterborough, New Hampshire.  Fifteen emerging writers gathered for ten days in this quaint village to share their new work with six established mentor/writers.  A total of 29 professional actors joined the group on various days to give table readings and public concert readings to a dozen new full-length scripts. It was an exciting retreat-like experience, with numerous workshops geared to our craft and art, many pitch sessions where new story ideas were shared and dissected, and pretty much non-stop discussions of one aspect or another of the writing process and how we manage to survive as creative artists.

What I’m describing, of course, is the latest gathering of the low-residency MFA in Writing for Stage and Screen program that I run out of the New Hampshire Institute of Art.  Six faculty joined our 15 students–some about to graduate and others just entering the program–and all of us spent the ten-day residency celebrating and embracing our art form and the creation of new plays, screenplays and teleplays.

Our mornings (and some afternoons) were spent in pitch sessions or craft-oriented workshops on such topics as dialogue, foreshadowing, visualizing story, dramatic structure, and expanding the staging tools available to the writer.  Numerous writing exercises were assigned.  There was even a two-day workshop on how the writer can “actor-proof” his or her script in which student writers worked in-depth with a group of experienced actors on various interpretations of scene material supplied by the writers–an eye-opening experience for many.

The readings of new student scripts written during the previous semester under the tutelage of a professional mentor were scheduled either in the afternoons and/or in the evenings (after lively dinners at one of several village restaurants).  This sharing of new work always is the highlight of each residency as scripts are given voice for the first time.  And the feedback and critique sessions that follow each reading are invaluable to the writers.

Here’s a photo of one of our table readings: 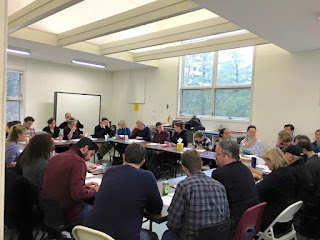 And two of our professional actors:  Emmy Award-winner Gordon Clapp and Lisa Bostnar, who also serves as our Casting Director: 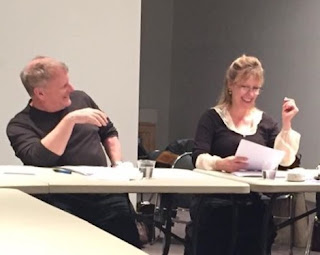 And here’s a shot of one of our public concert readings: 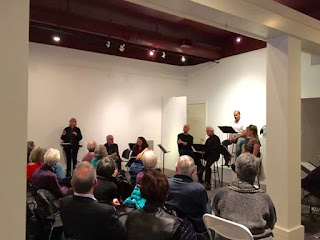 Our student writers left the residency armed with new story ideas to develop into working drafts during the spring semester–drafts that will be given voice for the first time at our next residency in July. A new mentor was assigned to each writer and all are now off and running, already well into the writing process on their new projects.

I must say that I love running this program.  It is, without question, far and away the best way to work with student writers who not only desire to be good stewards of their considerable talents, but eager to learn their craft, explore in depth their writing process, and produce a viable body of work while in our two-year program.  And the proof is in the pudding:  Our recent grads (and even some of our current students) are already winning national competitions and garnering serious recognition and productions of their work.

I’m the Program Director of the low-residency MFA in Writing for Stage and Screen being offered by the New Hampshire Institute of Art.  Our next residency runs July 21 – 31, 2016 and we are now considering applications for entering the program in July.  I’m also a playwright and screenwriter, producing partner in my production company Either/Or Films (The Sensation of Sight and Only Daughter), and a professional script consultant.